By AdminSeptember 1, 2021No Comments

Blockchain is a distributed and immutable ledger that simplifies the process of recording and managing both transactions and assets in a corporate network. 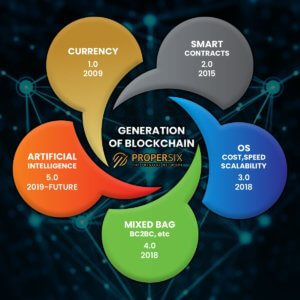 What’s more, blockchain is the cutting-edge database technology underpinning almost all cryptocurrencies. It makes it incredibly difficult to cheat or hack the system by spreading identical copies of the database across the entire network.
While cryptocurrency currently stands as the most popular application of blockchain technology, it can serve a wide range of other uses. The best part is that on a blockchain network, virtually anything of value may be recorded or traded. That helps to lower the risk and cut the costs for all parties involved.
With that said, let’s look more into the elements of a blockchain and how blockchain technology works.

What are the Key Elements of a Blockchain?
• The distributed ledger technology: the distributed ledger and its immutable record of transactions is accessible to all network participants. Transactions are only recorded once with this shared ledger. This helps to eliminate duplication of effort, which is common in traditional corporate networks.
• Smart contracts: in blockchain, there is also a set of rules known as smart contracts. These rules are stored on the blockchain and executed automatically to speed up transactions. These smart contracts can be used to specify requirements for corporate bond transfers, including payment terms for travel insurance.
• Immutability: with blockchain technology, after a transaction has been logged to the shared ledger, no participant can edit or tamper with it. Even if a mistake is found, a new transaction must be made to correct the previous error in a transaction record, and both these transactions must be visible.

How Does Blockchain Work?
The blockchain is often described as a chain made up of individual blocks of data and details of transaction. As each transaction occurs, it’s recorded as a block of data. These transactions usually depict the movements of both tangible and intangible assets. This data block can store any information you want about the state of a specific shipment.
Each block of data has a link to blocks that came before and after it. As the assets change location and ownership, the blocks form a data chain. These blocks tend to validate the exact timing as well as the sequence of transactions. What’s more, they are linked together securely to prevent blocks from being changed or placed between two already existing blocks.
In the blockchain, transactions are linked in an irreversible chain. Here, every successive block is used to reinforce the previous block’s verification, and subsequently, the entire blockchain. This makes the blockchain tamper-evident, giving it immutability. That reduces the risk of the blockchain being tampered with by any malicious actors. Therefore, it creates a trusted record of transactions for you and the other users in the network.

Benefits of Blockchain
• Blockchain creates greater trust as you are part of a members-only network. This guarantees you that you receive timely and accurate data. Also, you can rest assured that your confidential blockchain records are only shared with members of the network to whom you’ve granted access.
• Greater security. Blockchain makes it almost impossible for anyone to make fraudulent transactions. To enter a single forged transaction, they will need to hack every node on the network and change every ledger, which can be very difficult. That’s because most blockchain systems use proof of work and proof of stake verification methods.
• Efficient Transfers. Blockchains operate 24/7, making it easier for people to make more efficient asset and financial transfers across international borders. Parties involved don’t have to wait days for government agencies and banks to approve everything manually.
The Bottom Line
Blockchain has outstanding potential to transform many situations in our world currently. However, its future mostly depends on the future of government policies. There is no denying, blockchain still has a few hurdles, especially energy costs and transaction limits. But investors who can see the potential in this technology, it’s worth investing in blockchain-based investments. Everdime.com is a blockchain technology development firm enabling the easier adoption of cryptocurrencies, fan tokens and NFTs